How do you build an office environment that will help to attract the best talent, consolidate a new team in one environment, encourage innovation and creativity, and support the rapid growth of a new brand, product, and business? 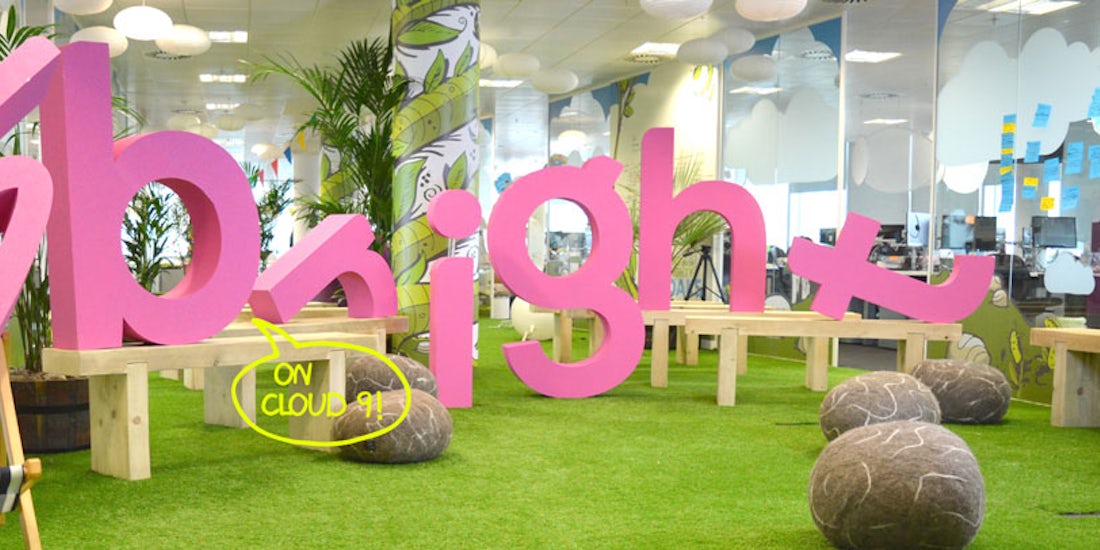 This was the question we asked ourselves prior to the development of our ‘Cloud 9’ headquarters in the Peninsula Building, Manchester.

Why did we want to live on Cloud9?

BrightHR was established in April 2015, following the appointment of a new management team and the consolidation of a number of employees from different divisions within an existing operation. This was always the foundation and we knew rapid expansion would be necessary to achieve our objectives of creating new products and services to reach a much larger number of customers.

When ‘The Pauls’ (BrightHR’s Co-Founders, Paul Tooth and Paul Harris) began to conjure up their vision for the company, they were determined to create the type of business they always wanted to work in. They also recognised society’s shifting working patterns and understood that as a forward looking tech company, in the HR space, it was essential we didn’t only espouse the virtues of workplace culture but actually lived them.

Here’s what we did

After bringing together the initial team into one small office space, The Pauls knew they would have to source a space that would facilitate growth and encourage the best people to join the team — something the small office space they first inhabited almost certainly wouldn’t do.

Fortunately, the ninth floor of the Peninsula Building in Manchester was available and it was decided this would be the perfect space in which to develop the business.

The core office area was transformed into a meeting space at the centre of Cloud9 (we’re based on the 9th floor and we’re a cloud-based business; what else we would call our office?), themed to convey a Jack and the Beanstalk ‘Land of the Giants’ space. This distinctive area defies the usual office layout, existing as a colossal 50ft long astroturfed garden, including a wide variety of features such as boulder footstools, bespoke wooden benches that can be used separately or brought together to form tables, oversized beanbag chairs that imitate leaves, tents, deckchairs, space hoppers as well as an assortment of plants — both living and inflatable! This is then joined together by beanstalk illustrations around the columns and walls of this space.

We worked on the layout of the surrounding workspace areas, designing elements to encourage our people to aim high, with a stratospheric motif that fits in perfectly with views of the city skyline outside. We softened the overhead lighting with billowy cloud linen fixtures, created supporting vinyl graphics for the walls to reinforce the cultural values that we were developing, all the while challenging our teams to “Think Brilliant” — reminding them to spend time each day to “Discover the Brilliance in Everyone and Set It Free”.

In addition, we arranged for desks to be fitted with cloud shaped desk dividers made of clear acrylic, which light up throughout the day with LED lighting in our core brand colours.

As a fun, courageous and energetic company focussed on empowering our team to take risks, fail from time to time, and dream big, these simple elements have helped encourage employees to live the brand on a daily basis.

The most important element of the creation of this space was a focus on the culture. This focus meant that a large amount of time during the initial period of developing BrightHR was spent by senior management, and the Pauls, actively engaging members of the team, encouraging them to feel empowered to work in a different way, and to feel empowered to use play in their everyday roles.

As part of the drive to help people ‘Think Brilliant on Cloud9’ the office is littered with things to play with including space hoppers, scooters, there are several large screens set up with games consoles, and we’ve got football nets, table tennis and board games in various spaces.

On top of this, almost every member of the team (including senior management) has a NERF gun, with many having several “pieces”, and multiple NERF Gun battles spontaneously break out throughout the day, causing a lot of laughter and interaction between different departments, which ordinary would be less collaborative due to physical proximity.

The Cloud9/Land of the Giant themed spaces have helped us embrace spontaneous play as a way to encourage the team to take a break from their normal working days whilst empowering them to change the way they think. We challenge our team and our customers to Think Brilliant — which means changing the way they normally do things, so outcomes aren’t always the same.

Evolving Cloud9 for the future

The development of Cloud9 and the culture it facilitates, is an ongoing and never ending process. We live and breathe our core values, and constantly work with our team to ensure they’re happy and engaged with the company. As a follow-up to the It Pays to Play report we commissioned from Professor Sir Cary Cooper, we are working with HRZone and Professor Adrian Furnham who is the Professor of Psychology at the University College of London, to produce a second report reviewing the important of the work environment — no doubt we’ll be looking to implement recommendations from these findings.

The challenge: how can you develop your office to enhance your workplace culture….?