Two sleeps. That’s all the time you have to prepare your workplace for the World Cup. 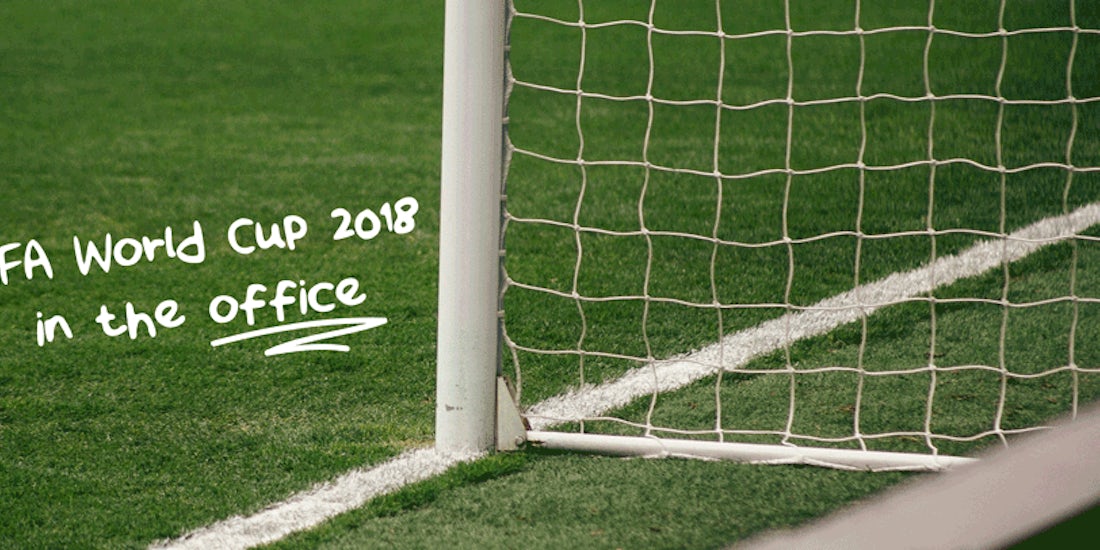 Picture this. England make it to the semi-final of the World Cup—we see you rolling your eyes, but it could happen.

They’re up against Argentina on Tuesday 10th July at 7pm.

For 87 minutes, the game’s a snooze-fest. And then.

Marcus Rashford wins a tackle. He swerves the ball around the Argentinean defence and crosses it to Harry Kane.

Kane hits it with his right foot past the keeper’s head and into the net.

Then the crowd goes nuts. The nation’s in a state of celebration.

But not your staff. They missed the game—all because of you.

(Might not be such a bad thing if you’re from the rest of the UK, of course. But stick with me).

Put yourself in your team’s position

Could you take it? The disappointed faces? The knowledge that you took this historical moment away from your staff?

Okay, okay. We know we’re being a touch dramatic.

But your footie-mad staff won’t see it that way.

That’s why you should start thinking about how you’re going to manage World Cup mania in your workplace.

You’ll be glad to know that all of England’s games take place outside of office hours.

With that said, your staff might work evenings or weekends, support foreign teams, or be that obsessed that they want to watch every match.

You could allow employees to work flexibly while the World Cup is on. That might mean leaving early, coming in later, or even working from home.

Just make sure that you offer flexible working to all your staff, as you won’t want anyone to accuse you of discrimination.

And if your employees want last-minute time off, you could relax your rules and accept their requests. But only if you’ve got enough staff to keep your business ticking along.

We know what you’re thinking. No work will get done if your staff’s eyes are glued to the TV screen.

But that’s not true.

Your employees are bound to be less distracted if they can watch the matches, as they won’t have to sneak off to check the scores.

And if you put the TV somewhere they can easily see it, your staff can get on with their work and still keep an ear out for the commentary.

Manage an office? Let your staff listen to the games online. But make it clear that you still expect them to do their work.

Get into the World Cup spirit

And as the World Cup only happens once every four years, now is your chance to create new memories with your staff.

Start by decorating your workplace with flags of the countries taking part. Hang them from the ceiling or secure them to tables.

Relax your dress code and let your staff wear football shirts. They’ll get to represent their team—or their favourite player—and embrace the spirit of the occasion.

And finally, you could organise a sweepstake for your team.

Traditionally, employees pay a couple of quid and get a team assigned to them. And if their team wins, they get to keep the final pot. But you can play without money if you’d prefer.

So it doesn’t matter whether Gareth Southgate’s team make it all the way to the final or crash out in the group stages, your staff will be grateful that you let them be a part of it.

PS. If you suspect a case of World Cup fever is going around the office, here’s some tips on how to tackle absenteeism during the World Cup.

Back to Management talk

Why holiday inclusivity is a gift to your business

World Mental Health Day 2021: How to support LGBTQIA+ employees in the workplace