Wellbeing in the workplace: putting Cloud9 to work

It really does pay to play in a professional way 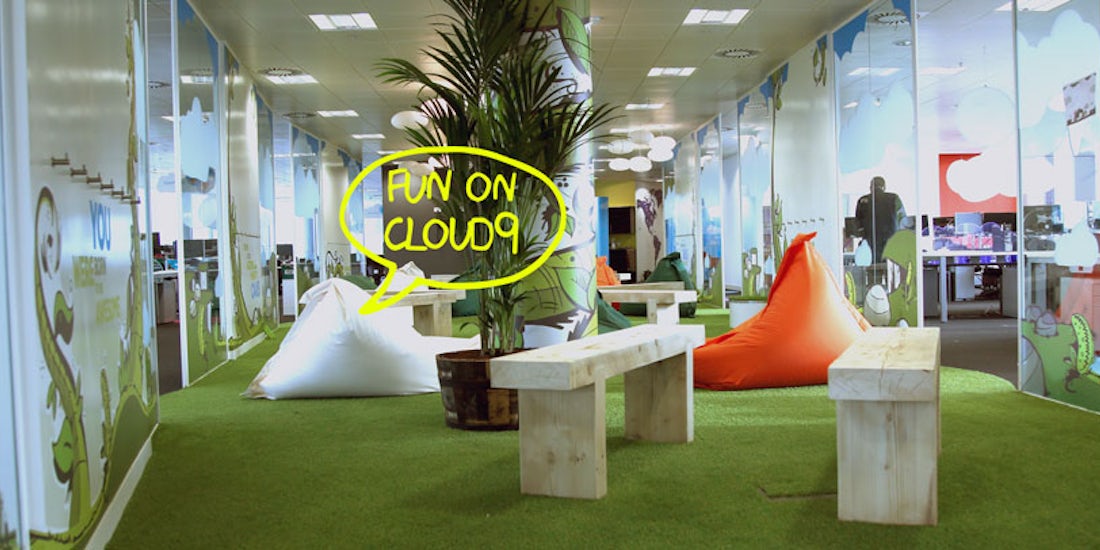 We were determined not to see our office as an amortized asset but something that would work hard for us over time. It was never just about using the space, we had a very specific vision for how this space could be utilised to create a more brilliant workplace.

Our approach to our workplace culture and environment has been further developed by and projected based on research we commissioned from Robertson Cooper and headed up by one of the UK’s leading business psychologist Professor Sir Cary Cooper.

The It Pays to Play report demonstrated the importance of fun in the workplace to attracting and retaining a workforce which is increasingly being made up of millennials. Millennials act more like consumers when thinking about their employers; being able to anonymously shop for roles online and not being prepared to stay in a role where they feel undervalued or where they don’t feel engaged.

We have found it relatively easy to attract and retain our people, having a much lower workforce attrition rate than would be anticipated. We believe our office space and the culture facilitated by this space, has been core to achieving these objectives.

Through the research carried out for the It Pays to Play report we can see that there is a clear correlation between the uses of fun in the workplace. We found:

The concept of using fun in the workplace isn’t a new one, there have been several academic studies into using fun to boost productivity and there are many people who would tell you if you’re not finding what you’re doing fun you shouldn’t be doing it at all. What is new, is the idea that an employer should go out of their way to empower their employees to have fun in the workplace.

There are a number of simple ways in which the workspace can be improved and you can spend as a few pounds on toys for around the office to several hundred thousands of pounds (the sky is the limit really!). We spent around £50k on the initial set up of the office space and we have been adding to it ever since! Since the start of 2015, and especially since April 2015 when BrightHR was formerly founded, we’ve grown the team from approximately 20 members of staff to a team of over 80 today.

As a relatively new company, it’s hard to quantify how effective our strategy has been, however we feel the retention of our team members and the ability of the company to attract enquiries for jobs outside the usual recruitment process, which includes using agencies, is assisting in reducing the costs associated with employee churn.

How we have used our workplace to engage our customers

Since launching our product in November 2015 we have worked tirelessly to espouse the virtues of creating fun and engaging workplaces, and have had coverage in national press including many newspapers, radio and TV contributions.

BrightHR’s product is HR software that helps reduce the admins for HR professionals, so they can concentrate on working on other areas of personnel management.

We’ve already made a significant contribution to the debate, engaging with Professor of Organizational Psychology and Health at Manchester Business School, University of Manchester, Sir Cary Cooper in our It Pays to Play report looking at fun at work, which has been downloaded by thousands of HR professionals throughout the UK.

In addition, we have also worked with a number of other thought leaders including Professor of Organisational Psychology at University of Bath Rob Briner, who took part in a webinar discussing the value of fun at work, and we are currently working with Professor of Psychology at University College London Adrian Furnham in further developing core themes as well as expanding the concept in new directions.

Through press coverage and our engagements with leading influencers in HR, we hope to lead the discussion surrounding creating workspaces such as Cloud9; helping other businesses to create collaborative spaces in which employees are engaged, creative, and innovative and where they are empowered to use play every day and where they actually want to spend time. We will continue to advance this message and strive for employees to achieve brilliance, fulfilling our singular purpose: To Discover the Brilliance in Everyone and Set It Free.

Working on your workplace to better engage your employees

Whether you’ve got a serious budget in mind or want to keep it as cost effective as possible there are lots of things you can do to improve your workplace. If you’d like to understand more about why an engaging work environment is important why not download our It Pays to Play report.

In this series of blogs we’ll look at how you can implement fun in the workplace to better engage your customers and whilst you might take some cues from the things we’ve done, there are bound to be examples out there that might better suit your business.

Back to Healthy minds

How to prevent employee burnout this winter